EBANGA™
The only FDA-approved lyophilized treatment for Zaire ebolavirus administered as a single 1-hour IV infusion.*

* Infusions may be slowed or stopped if necessary, to alleviate any side effects.
** Real-Time Polymerase Chain Reaction (RT-PCR )

In November 2018, the NIH, National Institute of Allergy and Infectious Diseases (NIAID) and the Institut National de Recherche Biomédicale (INRB) of the Democratic Republic of Congo (DRC) began a Phase 2/3 clinical trial testing multiple investigational Ebola therapies. The trial, known as PALM (short for “Pamoja Tulinde Maisha,” a Kishwahili phrase which roughly translates to “together save lives”) was conducted by a research consortium overseen by the World Health Organization (WHO) that included nongovernment organizations and the DRC Ministry of Health. (1)

Preliminary results announced in August 2019 prompted an independent data and safety monitoring board to recommend the study be stopped and that all future patients be randomized to receive either EBANGA™ or REGN-EB3 in an extension phase of the study. (1) 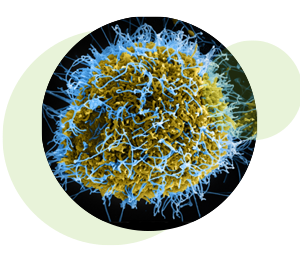 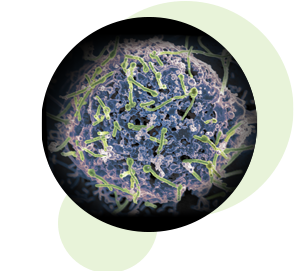 For more information regarding Ebola virus disease: WHO CDC

EBANGA™ is a single monoclonal antibody that was isolated from a human survivor of the 1995 Ebola outbreak in Kikwit, in the DRC. This human survivor maintained circulating antibodies against the Ebola virus surface glycoprotein for more than a decade after infection. (1)

The antibody was developed by scientists at the National Institute of Allergy and Infectious Diseases (NIAID), who discovered these Ebola virus antibodies in the blood samples from that survivor. Investigators from the Institute for Research in Biomedicine in Switzerland isolated the specific antibodies to test for potential efficacy in treating Ebola virus infection. (2)

NIAID and Dartmouth College researchers then studied how Ebanga™ (ansuvimab-zykl) neutralizes the Ebola virus and determined that it binds to the core of the Ebola glycoprotein, blocking its interaction with a receptor on human cells. This area of the Ebola glycoprotein, called the receptor binding domain, was previously thought to be unreachable by antibodies because it is well-hidden by other parts of the virus, and only becomes exposed after the virus enters the inside of cells. (2)

From that survivor of the 1995 Kikwit outbreak, monoclonal antibodies (mAbs) were isolated that neutralize recent and previous outbreak variants of the Ebola virus and mediate antibody-dependent cell-mediated cytotoxicity in vitro. (1) 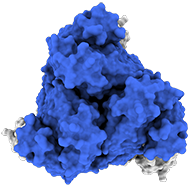 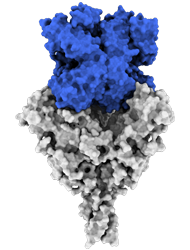 Side view:
Model of the antigen-binding fragment of the monoclonal antibody EBANGATM (blue) in complex with the mucin-like domain deleted form of the Ebola virus GP (grey)
Credit: J. Misasi et al, NIAID 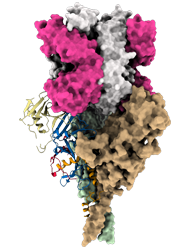 Model of mucin-like domain deleted form of the Ebola Glycoprotein (GP∆Muc) in complex with the antigen-binding fragment (Fab) of the monoclonal antibody EBANGA TM . EBANGA TM Fabs (heavy chain in pink and light chain in white) bind in a near-vertical orientation to the central chalice of GP∆Muc trimer, primarily making contact with the core region GP1. Two of three Fabs are visualized in this side view. Molecular surfaces of two GP∆ Muc protomers are colored in green and beige, whereas the third protomer is shown as a ribbon representation with colors representing various regions of Ebola GP.
Credit: J. Misasi et al, NIAID 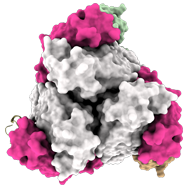 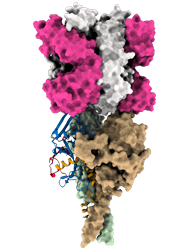 Model of the predicted Ebola Glycoprotein following cathepsin cleavage (GPcl) in complex with the antigen-binding fragment (Fab) of the monoclonal antibody EBANGA TM . EBANGA TM makes contact with the only surface exposed residues of the receptor binding domain (RBD) in the uncleaved GP and obstructs access to the remaining RBD residue that are exposed following cathepsin cleavage. In this manner, EBANGA TM prevents the Ebola GP from binding to its receptor protein, NPC1, and blocks infection. Molecular surfaces of two GP∆Muc protomers are colored in green and beige, whereas the third protomer is shown as a ribbon representation with colors representing various regions of
Credit: J. Misasi et al, NIAID 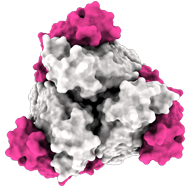 Side view:
Model of the antigen-binding fragment of the monoclonal antibody EBANGATM (blue) in complex with the mucin-like domain deleted form of the Ebola virus GP (grey)
Credit: J. Misasi et al, NIAID

The 10th outbreak of EVD to affect the DRC was declared on 1 August 2018. (1) By the time the outbreak was declared over by the DRC Ministry of Health nearly two years later, 3,300 confirmed cases resulted in a 67% case fatality rate (CFR). (2) It is currently recognized as the longest outbreak in DRC history and the second largest Ebola epidemic ever recorded. (3)

The name ‘ansuvimab’ is inspired by Dr. Nancy Sullivan. Without her leadership and scientific acumen, this medicine would not have been possible.

The PALM trial was a multicenter, open-label, randomized, controlled trial initiated in 2018 in the DRC to evaluate the safety and efficacy of four investigational therapies for EVD. The trial was jointly sponsored by the WHO, the NIH and the INRB in the DRC.

Four investigational therapies for EVD were studied in the DRC during the 10th outbreak, despite persistent security challenges, including militia attacks on the Ebola Treatment Units (ETUs) in the PALM Trial. The willingness of study participants to share their data in the hope for a cure, and the remarkable efforts of our colleagues in the ETUs who preserved the resulting study data through fires, site closures and municipal lockdowns are the champions who embody the study title and aim: Together Save Lives. 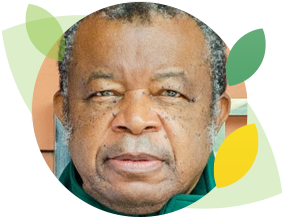 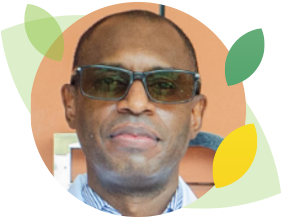 Dr. Sabue Mulangu
is a Senior Lecturer in the Faculty of Medicine, Dept. of Microbiology at University Hospital of Kinshasa. A former infectious disease researcher at the DRC, Institute National de Recherche Biomédicale (INRB). Dr. Mulangu is the principal author of the NEJM paper on the PALM RCT study (Mulangu, 2019) and now serves as the SVP, Global Medical Affairs for Ridgeback Biotherapeutics. 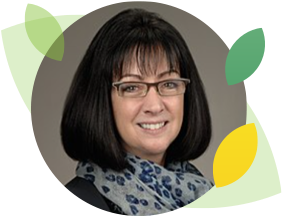 Dr. Nancy Sullivan
is a tenured Senior Investigator and Chief of the Biodefense Research Section at the Vaccine Research Center, a division of the National Institute of Allergy and Infectious Diseases (NIAID) at the NIH.

In the PALM trial, 174 subjects (120 adults and 54 pediatric subjects) with confirmed Zaire ebolavirus infection were treated with EBANGA™ and 168 subjects were treated with the investigational control. All subjects received optimized standard of care treatment (oSOC). The primary efficacy endpoint was 28-day mortality.

(1) CtNP refers to “cycle threshold for the nucleoprotein gene”, a measure to determine viral load in the bloodstream

Ridgeback Biotherapeutics is committed to making EBANGA available to the people who need it most. In response to the 2018 Ebola outbreak in the DRC, Ridgeback worked with the WHO, the U.S. FDA and the DRC Ministry of Health to offer EBANGA™ under an expanded access protocol, and to include it in the PALM Trial. Ridgeback will continue to provide EBANGA™ for free in response to outbreaks through the MEURI expanded access policy.

With BARDA support, Ridgeback is actively working with non-governmental organizations and public health agencies to ensure continued access to EBANGA in low- and middle-income countries.

Monitored Emergency Use of Unregistered and Investigational Interventions (MEURI) is an ethical protocol developed by the World Health Organization to evaluate the potential use of experimental drugs in the event of public health emergencies.

BARDA = Biomedical Advanced Research and Development Authority, part of the HHS Office of the Assistant Secretary for Preparedness and Response (ASPR).

TO HEALTHCARE WORKERS AND OUR COLLABORATORS:

Thank you to the many dedicated and courageous healthcare workers in the DRC who provided care to those suffering with Ebola. The PALM trial could never have been successful without your spirit and commitment. We acknowledge and respect the contributions each of you have made to this important advancement in public health and wish to convey the Ridgeback team’s sincere gratitude and appreciation.

Our collaborators are more than simply partners in drug discovery and development. They are thought leaders and teammates who work with us to solve global health threats.

Ridgeback Biotherapeutics’ research and development efforts for EBANGA TM as a treatment for Zaire ebolavirus are supported through collaborations with various governmental and global health organizations: 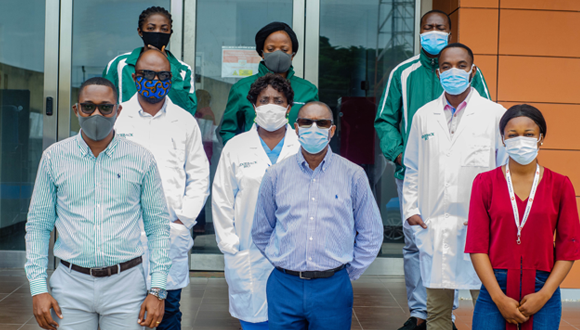 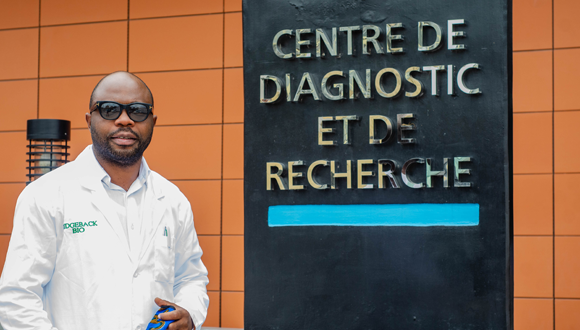 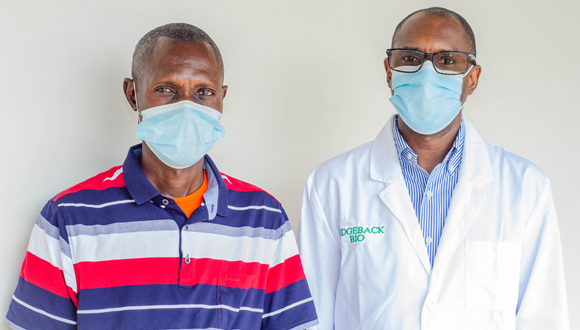 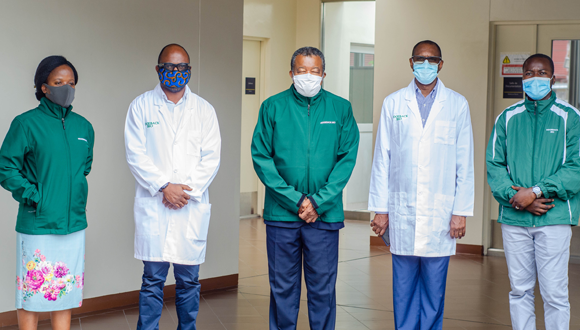 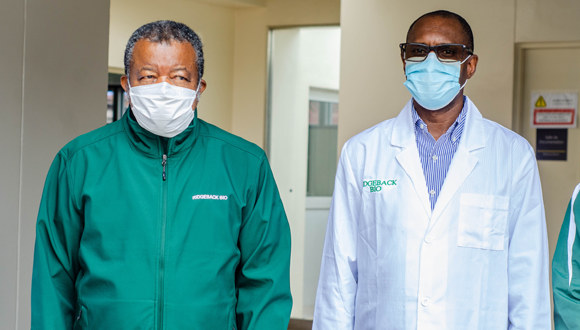 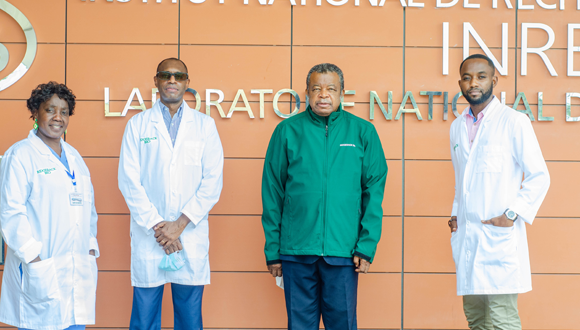 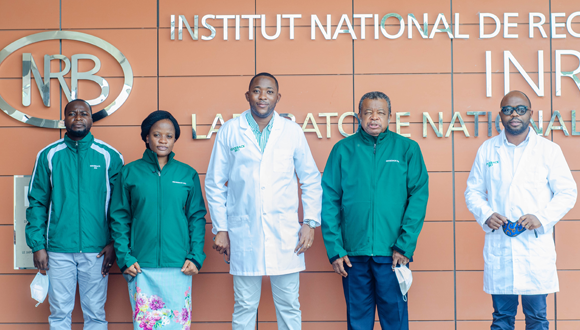 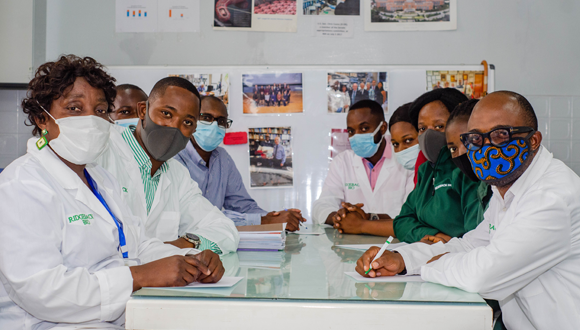 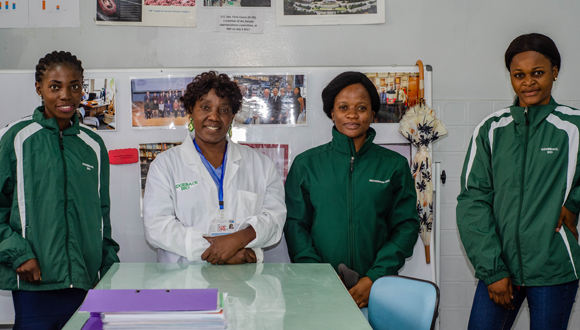 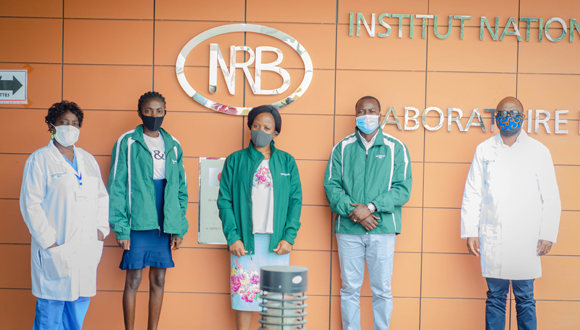 In conjunction with the FDA approval of EBANGA™ (ansuvimab−zykl), the Wayne and Wendy Holman Foundation has announced a newly funded program that will work to serve and support scientists and scholars from the DRC who wish to pursue advanced science degrees both in the DRC and abroad. 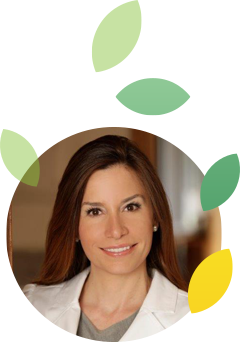 Global coordination of thoughtful and talented humanitarians and scientists made EBANGA™ a reality.  The world owes a tremendous debt to the incredible research that was conducted at the NIAID’s Vaccine Research Center (under the direction of Drs. Sullivan, Mascola and Ledgerwood) and the Democratic Republic of the Congo’s INRB (under the direction of Prof. Muyembe).  This collaboration, combined with massive clinical trial support provided by (WHO, ALIMA, MSF, IMC, NIAID Division of Clinical Research and BARDA) made the impossible become a reality – a feld trial to demonstrate the effectiveness of EBANGA™ in patients with Ebola.  At Ridgeback, we are honored to call these groups our partners – our comrades in fghting the good fght against vicious diseases.  Importantly, all of these efforts were truly made possible by the patients and their families. Without their trust and confdence, the landmark PALM randomized controlled trial would never have been possible. This heroic leap of faith has transformed Ebola forever.  Ebola is now a treatable disease.

In an effort to support the country and people who believed in our efforts, the Wayne and Wendy Holman Foundation initiated a newly funded program that will work to serve and support scientists and scholars from the Democratic Republic of the Congo who wish to pursue advanced science degrees both in the DRC and abroad.

The recommended dosage of EBANGA™ for adult and pediatric patients is 50 mg/kg administered as a single IV infusion over 60 minutes. EBANGA™ must be reconstituted with Sterile Water for Injection, USP then further diluted in 0.9% Sodium Chloride Injection, USP or Lactated Ringer’s Injection, USP prior to IV infusion.

Hypersensitivity Reactions Including Infusion-Associated Events: Hypersensitivity reactions including infusion-associated events have been reported with EBANGA™. These may include acute, life-threatening reactions during and after the infusion. Monitor all patients for signs and symptoms including, but not limited to, hypotension, chills and elevation of fever, during and following EBANGA™ infusion. In the case of severe or life-threatening hypersensitivity reactions, discontinue the administration of EBANGA™ immediately and administer appropriate emergency care.

No vaccine-therapeutic interaction studies have been performed in human subjects using EBANGA™. However, because of the potential for EBANGA™ to inhibit replication of a live vaccine virus indicated for prevention of Zaire ebolavirus infection and possibly reduce the efficacy of the vaccine, avoid the concurrent administration of a live vaccine during treatment with EBANGA™. The interval between administration of EBANGA™ therapy and live vaccination should be in accordance with current vaccination guidelines.* The efficacy of EBANGA™ among subjects who reported receipt of a recombinant live vaccine prior to their enrollment in the PALM trial was similar to subjects who did not report receiving a vaccine prior to enrollment.

This information is intended for Healthcare
Professionals Only
CANCEL